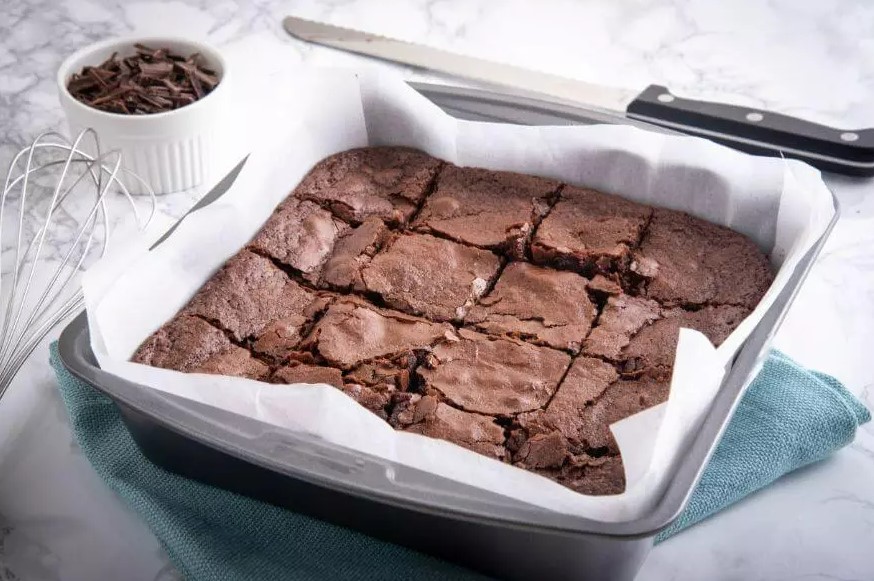 Brownies are a great dessert to make for a birthday party, potluck, or just because. Unfortunately, these are one of those desserts that can be a little tricky to cut without destroying them. Here are some tips on how to avoid the dreaded brownie disaster.

I enjoy baking brownies the most. They are virtually impossible to mess up, unlike cookies. They can be made without a stand mixer in a single bowl.

Depending on your mood, you can dress them up or down. In summary, brownies are easy to make. The tricky part is slicing brownies. Let me show you how you can cut brownies without destroying them.

What Is The Best Way To Cut Brownies Cleanly?

The key is to make sure the brownies are cool, use the right knife, and slice them correctly. Then, you can achieve pristine results by following the how-to guide above.

Are There Any Tricks To Cutting Brownies?

Take your sharpest knife and run it under hot water for 10 to 15 seconds, then dry it carefully before cutting your brownies. You’ll thank me later.

It is best to cut brownies with a hot knife, a plastic knife, or a regular knife covered in cooking spray once they have cooled completely (or frozen). A ruler will help you be more precise.

How To Prevent Brownies From Falling Apart When You Cut Them?

Yes. That is why I’ve prepared this guide. The following is a step-by-step guide on how to cut brownies. But is it really necessary? It’s not.

It’s important to cut your brownies properly when selling them for a business or even at a bake sale. Following these simple steps will help you cut brownies correctly.

1. Prepare The Brownie Pan By Lining It

Prepare your baking pan by lining it with parchment paper or aluminum foil before you bake your delicious ingredients. This will make it easy for you to remove the brownies from the pan without causing any mishaps.

2. Allow The Brownies To Cool Completely

When your brownies are hot, don’t try to cut them. In the end, you will end up with a crumbling mess that doesn’t look professional. Instead, it is recommended that you let your brownies cool completely before cutting them.

If you want to go a step further, you can freeze your brownies. It won’t ruin your brownies if you freeze them. By freezing, you can slice quickly and easily without making a mess.

Slice your frozen treats and let them thaw at room temperature while they thaw. As a result, the flavor and texture will return to normal, as well as their appearance!

3. Take A Measurement Of The Brownies

Remove the brownies from the pan once they have cooled and covered with aluminum foil or parchment paper. Hopefully, there won’t be any mishaps along the way. You’ll need a ruler next.

It would be best to decide how big you want your brownies to be. When I am selling brownies, I usually make 2-inch-sized brownies, but you can choose any size you like.

Measure out your brownies using the ruler, regardless of the size you choose. To show where you need to cut, make a slit on both sides of the brownie block if you want 2 inches.

It’s best to measure from the middle when measuring. By doing so, you can cut off the excess if you can’t measure 100% accurately.

Cooking spray will help your knife’s blade glide more easily through the bars if you spray it (on both sides).

5. Let’s Slice Up The Brownies

The brownies are ready for slicing now. All of your options work fine, and you have a few to choose from.

What’s the point of square brownies? You don’t have to be square. Rather than using square cookie cutters, consider using fun shapes instead. You should heat cookie cutters in hot water before using them and clean them after each use.

Apply cooking spray to the blade of a regular chef’s knife. As a result, stickiness and crumbling will be reduced. Each cut should be wiped off and recoated before slicing.

Have you ever tried cutting brownies with a plastic knife? The nonstick properties of plastic knives make slicing and dicing easier. To achieve the best results, wipe the cutting board clean before each cut.

Baked goods are easier to cut when they are heated. Make sure you don’t burn the blade with your lighter. Think carefully before you act. Place the knife in super-hot water. You can use it to cut. After cleaning, heat it again before cutting.

Make Sure You Don’t “Saw” The Brownies

Cutting brownies with a knife that is sunk in and dragged back and forth is the worst thing you can do. The knife will end up covered in crumbs, and the brownies will have jagged edges. You should instead take a step back and look at the pan before carving it.

Knives (whether they are hot, plastic, or coated with cooking spray) need to be used properly. By pressing the blade into the brownie, you will be able to do so. Next, decide where you should make your cuts using the markers you made earlier.

Once you have dragged the blade back, release it. It is best to avoid using the seesaw method as it can result in a big mess and ruin your brownies’ professional appearance.

Prepare the brownie pan and estimate how many brownies you’ll need. This is the point where some people might grab a ruler.

It’s OK to eyeball this step if you don’t need the squares to be precisely the same size as I did. It doesn’t matter how uneven the brownies are; they’re still delicious.

When To Use A Chef’s Knife To Cut Brownies?

What are the benefits of cutting with a chef’s knife? Using the long blade, you can cut across the length of a pan in one go. In order to make your first cut with a chef’s knife, lightly spray both sides of the blade with vegetable cooking spray.

Make sure the blade is clean after each cut by wiping it with a warm, damp cloth. Next, reapply the cooking spray lightly to the blade. Spray, wipe, and cut as you go. Before you cut with your chef’s knife, warm it up to make it seem like it will melt right through the brownie.

Rewarm the knife and remove the crumbs by dipping them and wiping them into a tall container of boiling water between each cut. In addition to brownies, we also use this hack to cut birthday cakes perfectly.

How to Cut Brownies Cleanly Using a Pizza Cutter?

Great news if you own a pizza cutter: it’s an easy, fast method for cutting brownies. Once the blades are lightly sprayed with cooking spray, lightly swipe the blade across the width of the brownie to cut it in half.

Cut the brownie until it is completely cut up, then wipe the blade off, spray the blade, and cut again.

How To Cut Brownies Cleanly Using A Plastic Knife?

The nonstick nature of plastic knives makes them the ideal tool for cutting brownies. Did you know that? It takes two cuts to cut the entire length or width of a baking pan with a plastic “dinner” knife. Start by making a cut halfway down the brownie’s length. Do not continue.

When Cutting Brownies, Is It Better To Cut Them Hot Or Cold?

Ensure that brownies are completely cooled before cutting them if you want to cut them cleanly. It’s possible to make perfect brownies using our methods, but none will work if you’re impatient and cut them when they’re hot or even warm.

What Knife Should I Use To Cut Brownies?

Why Do You Use A Plastic Knife To Cut Brownies?

As you slice, plastic knives won’t tear the brownies because they are naturally nonstick. However, the fudgy center of brownies sticks to a metal knife when cut with one.

What Is The Best Time To Cool Brownies Before Cutting Them?

A minimum of 30 minutes. My advice is to wait as long as you can. Then, please put them in the freezer instead!

Why Do My Brownies Crumble When I Cut Them?

How Do You Cut Perfect Brownie Squares?

Even after years of practice, eyeballing perfectly square brownies would still be challenging. So, even today, I still use a ruler – and so should you. The perfect brownie square can be achieved with the help of a ruler with accurate markings.

It is important to be picky about the way you cut brownies. Due to their crumbly nature, brownies can leave an unsightly mess. Cut correctly after lining, cooling, and measuring.